Banni festival is an unusual festival celebrated in Andhra Pradesh. It involves visiting a temple well equipped with weapons and either kill or be killed. This sounds strange and it really is!

Banni actually refers to mock fight for capturing the idols during the Banni festival. The Supreme Court had put a ban on this festival but to no avail as the locals consider it as their ancient custom. Let us know more about this festival with its peculiar events. 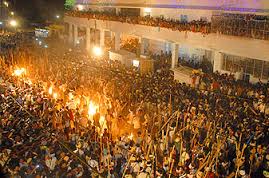 How is Banni Festival Celebrated

Every year, on the night of Dussehra festival (Vijayadashami), hundreds of men head towards Devaragattu temple in Kurnool district of Andhra Pradesh. They carry long sticks or lathis with them for hitting each other with these sticks on the head! People reach here from Andhra Pradesh and Karnataka both as the temple is located on the border of these states.

Come midnight and the ritual commences - the idols of Parvati (Malamma) and Shiva (Malleshwara Swamy) are brought down to the foot of the hill to Neraneki.

After performing prayers and 'kalyanam', the deities are carried by keeping them inside a thick cloth bag and then carried on the shoulders by a strong devotee down the hill. Few of the devotees form a ring of security around the idols but the others try to 'hijack' or capture the idols. The devotees also hold torches and clubs to protect the deities.

Devotees, who are generally farmers, walk in a procession down to the hill with their shirts drenched in blood - red all over! This 'victory parade' symbolizes killing of demon by Mala-Malleshwara (Shiva). The procession with its strange ritual continues till dawn.

Neranki village is 4 kms. from the temple. It is the residents of Kothapet and nearby villages who make attempts to hijack the idols. The residents of Neraniki and nearby regions try to defend themselves along with protecting the deities from clubs and lathis. 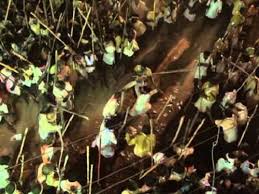 Devotion takes on a peculiar garb during Banni festival. Doctors and other paramedical staff are kept ready in case of any emergency. They stitch wounds on the head or apply turmeric on the wound. The critically injured are also referred to nearby Adoni Government hospital.

Police too is vigilant during Banni festival. Awareness camps are conducted along with tough stance taken on the sale of arrack. Also, they keep an eye on anti social elements.


How did Banni Festival Start

The festival was celebrated by people under Vijayanagara Empire. It is believed to be a very ancient festival. Police have a record of the past hundred years of celebration of this festival! However, they proclaim that though many people are injured, cases of death are rare. 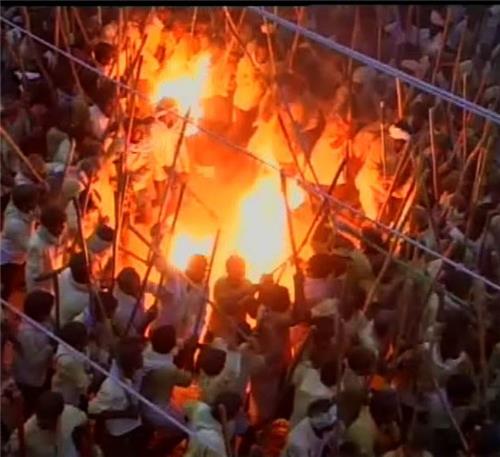 How Relevant is Banni Festival Today

Devotees find the festival as just another sort of 'dandiya' dance but with bigger and stronger sticks! They get enthused and swirl their sticks in all directions while going in the procession. In ancient times, devotees used to carry axes and spears but today they bring only long sticks. They get hurt (including fractures) but feel it a way of appeasing God. Most devotees and even the temple authorities find this event a case of immense devotion and not aggression.

This is, no doubt, a festival of lathi-weilding devotees at Mala Malleswara Swamy temple located at Devaragattu near Aluru in Kurnool district of Andhra Pradesh. Police and medical teams are bare spectators while devotees enjoy the frenzy. In 2006, there was a case of vengeful attack too. But every hurt is considered sacred by these devotees! The procession concludes after fortune-telling by the priest. The devotees hear the words of the priest with rapt attention and dedication.

Call it a festival of riots, killing, frenzy, blood bath or just pure customary celebration out of devotion to God, Banni festival does surprise you and goads you to think if it is religiosity or spirituality at its best!