Music is an integral part of India. There are some places in India which are famous for making of musical instruments. No doubt, creating a musical instrument out of a log of wood does need expertise, experience, passion, patience and dexterity!

Also known as 'Saraswati veena' , Bobbili Veena is a string instrument made by craftsmen living in Bobbili, Gollapalli (20 kms. from Bobbili) and Wadada in Vizianagaram district and Nuzividu in Krishna district.

The bobbili veena is patented and has earned the GI (geographical Indication) mark. 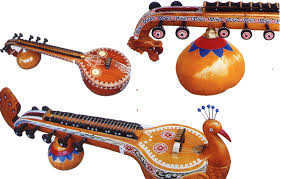 The bobbili veena came into existence in the 19th century. It was the result of Vizianagaram-Bobbili rivalry! A craftsman named Musanna Chinayya from Vizianagaram urged and challenged artisans of Bobbili to make veena showing their best craftsmanship. The zamindar of Bobbili  Raja Ravu Vankata Kumar krishna Ranga Rao, who was also a musician, accepted the challenge. He asked Sarvasiddhi Acchanna (of Viswa Brahmin community) to make an exceptional veena and he did so in a span of two months.


Why is Bobbili Veena so Special

The ruler of Bobbili played the veena and even provided training for other musicians. He set up veena making workshops for training the craftsmen in this art. The Bobbili veena has superior quality of sound with a fullness in tone. The veena comes in immaculate designs and  was used by music maestros at one time. 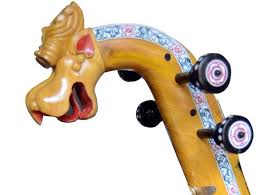 It is made from single piece of wood from jackfruit tree unlike other veena which are made by joining two pieces of wood. This is why it is also referred to as 'ekanda veena'. The central part has a lion's head  carved at the tapering end. The veena is decorated using inlay technique. However, today, plastic is used in place of ivory and stag horn. The frets of this veena are made of bell metal.

Tools used for making Bobbili veena include axe, hand drill callipers, saw, chisels, pliers, compass, hand lathe etc. You can differentiate a bobbili veena from the one made in Thanjavur, Mysore etc.

There are about 40 families which belong to the Sarvasidhi family in Gollapalli village near Bobbili. A few other families have set shops across the country. Since there are not many takers for bobbili veena, craftsmen have started making miniature veena which takes less time and can be gifted as mementos/memorabilia. 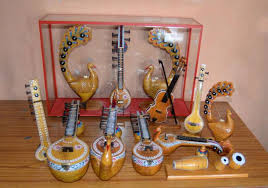 It takes around 20 days for making a professional veena while in the same duration, a craftsman can make 10-15 miniature veenas. That is why professional veenas are made only on order today. The cost of bobbili veena is around INR 16,000.


Steps Taken to Save the Traditional Art

In 1959, the Sarvasidhi veena makers formed a co-operative society known as 'Sharada Veena Society'. The State Government made the Craft Development Centre (CDC) in Gollapalli village. The marketing of the product is done by Andhra Pradesh Handicrafts Development Corporation . The Madras Telugu Academy has helped by presenting miniature veenas as mementos during various cultural events.

Today, most of these artisans have started 'repair work' of damaged and old veenas which adorned the homes of the rich and also professional musicians. Even for repairing the veena, one must know the instrument in detail, its intricacies etc. Problems which need to be rectified may include disintegration of reeds (melam) and breaking of 'kadava' (head of the veena as a result of mishandling).

The passionate artisans of Andhra Pradesh have done enough to carry on the tradition and art form for generations. With the help of the State Government and advent of booming e-commerce, their superior quality products will surely reach out to a larger audience all around the globe.