Customs to Bid Adieu to the Dead in Andhra

Customs to Bid Adieu to the Dead in Andhra

Andhra Pradesh state in India has diverse customs. The more you know about these customs, the better you can understand the people residing here, their customs and way of living. Here, we will know about customs that the people in Andhra Pradesh practice for those who have died.

Do not be surprised if you see a procession of dancing people who are actually carrying a corpse on a bier! Well, it all depends on the caste to which the dead person belonged to. If he was a 'Brahmin', he will be cremated without much fanfare. For some others, it is a time for fanfare, not without a musical band and throwing of coins mixed with rice and flowers into the funeral pyre! 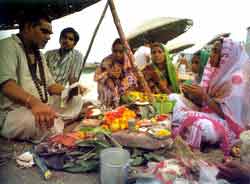 The customs in Andhra Pradesh change every few miles - from the tribal population, people living in rural areas to those residing in towns.

Usually, the corpse is buried in the sleeping posture. But 'Veerasaivas' are taken to the cemetery in a procession and buried in a sitting posture! Some also put the tools which the dead person used in his profession into his grave.

Brahmins and Kshatriyas practice many rites and rituals for the dead persons. Most of the people perform 'shradda' for the dead on the 'Pitru amavasya' which means 15th day of the dark fortnight during month of Aswayuja.

The 'divijas' (that is, twice born) have more elaborate ceremonies as compared to others. They also perform annual 'shradda' on the day of one's death.

Each clan/gotram among the Yanadis has a different spot (although at the same site) for burying/cremating the deceased person. People in the procession first drink liquor before bringing the corpse to the burial/cremation ground. In case a child dies, he is carried on the shoulders of the relatives. However, an adult is carried on a bier.

The pyre is to be built or the grave dug only by people belonging to the caste of the person who has died. A gunny bag is placed in the pit and then the corpse covered with a piece of cloth is placed. The pit is filled with earth and the nearest relative puts to handful of earth into the grave. In case of cremation, the chief mourner of the family lights the pyre.

After returning home, people who participated in the procession take bath and have liquor again. If a married person has died and has been cremated, his ashes are collected on the third day and buried. Stones are placed over this place with offering of non-vegetarian food in the name of the dead. This custom is known as 'Chinnadivasamu' (or Chinnadivasamast).

After 15 days or even a month, custom of 'Peddadivasamu' takes place wherein non-vegetarian food is offered to the dead after mixing it a hill stream/pond in the name of the dead person. This is also the day when bangles, black beads of the widow, tali matte etc. are done away with and the widow becomes eligible to marry again. 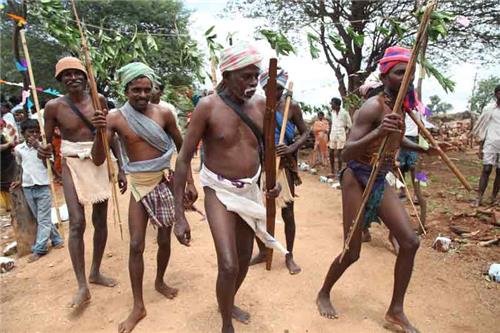 In case of Chenchus, the corpse is kept until everyone who belongs to the gotra of the deceased and lives in the same gudeme joins the funeral. A person who fails to attend the funeral is fined heavily! This is known as 'Thappu'.

A married woman's corpse is never touched by her parents. A messenger informs people residing in other neighbouring villages about the death. Chenchus who belong to Desari Chigurla, Kudumula, Gulla and Mandla gotra always cremate the dead. Before taking the corpse to the cremation ground, they drink mahua-liquor, place some jowar on the corpse and carry the corps on a bier.

However, no musical instruments are used in any of the death rites practiced by them. For 3 to 15 days, the neighbours do not touch the members of the bereaved family.

The customs remain different but emotions of sadness on the death of someone is the same for everyone, irrespective of gotra, clan or tribe one belongs to. The idea behind these customs is to stay together not only during good times but also lending a helping hand during trying times in life.