Transport has always been the backbone of every tourist destination. Hence, every government tries to enhance the transport infrastructure in their respective states to attract more and more tourists to their states. Andhra Pradesh is home to some of the most visited religious places and beaches of entire India, which makes it absolutely necessary to have a well developed transport system. The state is very well connected by all ways of transportation including Road, Rail and Airway to all other parts of not only Andhra Pradesh but entire India as well. Additionally, the state is also connected to various other countries by seaports along with the airways as well. The state is full of many ports as it has the second largest coastline of India. These seaports help the state in its economic growth via sea trade. 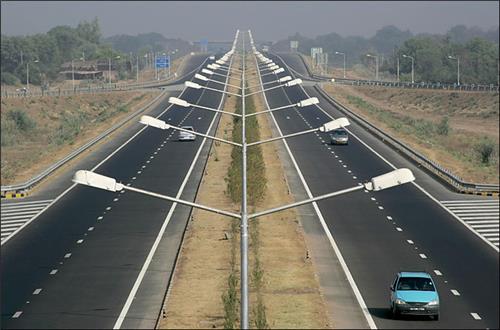 Andhra Pradesh has one of the largest road networks in India. Before the bifurcation of the state in 2014, it used to have the largest fleet in the world. However, now Tamil Nadu holds the owner for the same. It connects each and every place of the state with one another with the help of its huge road network. Railways of Andhra Pradesh have also been significant as it connects the entire country with the state. East Coast Railway zone and South Central Railway zone connects the state with other places of the state and India. Airways of Andhra Pradesh need significant improvement as Hyderabad has slipped in to Telangana after the bifurcation, which used to be one of the busiest airports of India. Visakhapatnam airport is the major airport of the state and offers domestic and international (limited destinations) flights to the passengers of the state.

The transport department of Andhra Pradesh which functions under the provisions of section 213 of the Motor Vehicle Act, 1988 is responsible for collecting of taxes, fees, motor vehicle registration, and granting of regular and temporary permits. In addition to these it also ensure safety of roads, checks drivers for speed and drunken driving and other offenses. 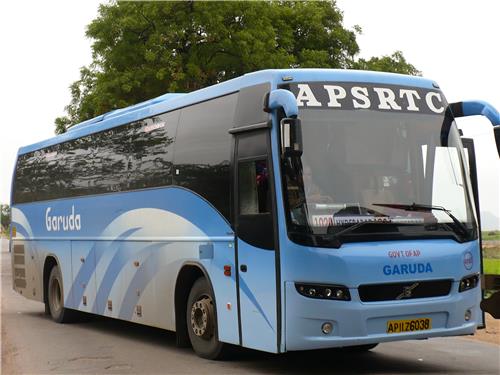 Buses are the most common medium of travel in India. Andhra Pradesh State Road Transport Corporation is responsible for proper operation of public service buses in the state. APSRTC runs various buses connecting all of the places of the state with one another. Vijaywada Bus Station (Pandit Nehru Bus Station) is the biggest bus station of the entire state. Private bus service providers are also available in abundance in the state and offer their services not only within the state but also for other states such as Tamil Nadu and Karnataka. Auto – rickshaw is the main medium of local transport in the state.

There are several important national and state highways connecting major cities within and outside the state. These national highways help improve trade and commerce and also inflow of tourists to the state.

National Highway 43: Vizianagaram Natavalasa Bobbili Gajapathinagaram Salur
Ramabhadrapuram
(All the above mentioned areas are situated in the Vizianagaram district) 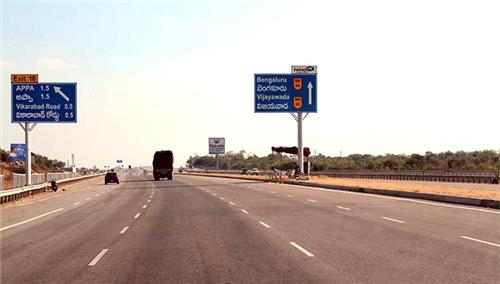 APSRTC is responsible for the management of bus network in Andhra Pradesh and serves around 14 million passengers every day. It was established in 1932 as Nizam's State Railways - Road Transport Division and was incorporated in 1958 as APSRTC. It runs buses in entire Andhra Pradesh connecting all of the places of the state together along with other states including Puducherry, Maharashtra, Telangana,Tamil Nadu, Chhattisgarh, Goa, Karnataka and Orissa as well. Every town of the state has a bus depot, which is responsible for the planning and operation of buses thoroughly. It offers various services including city bus service, pallevelugu, express, sapthagiri, delux, super luxury, indra air conditioned, garuda air conditioned, garuda plus air conditioned multiaxle and vennela sleeper air conditioned. It operates through 216 depots under 23 regions and 7 zones and has 778 bus stations and 1881 bus shelters. 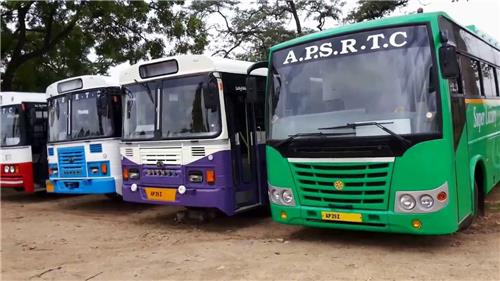 Seaports play a significant role in international imports and exports of any region, which results in a better economy of the same. They also enhance other maritime activities including fishing, water sports, tourism and ship repairing. Andhra Pradesh has a huge coastline of about 972 Km and hence is the pride owner of various sea ports. The annual cargo handling of the state ports is 58 million tonnes. Largest port of the state is situated in Visakhapatnam. Apart from that the state has 14 other ports out of which six are still in development phase only. Let us take a look at all of the ports of the Andhra Pradesh district wise: 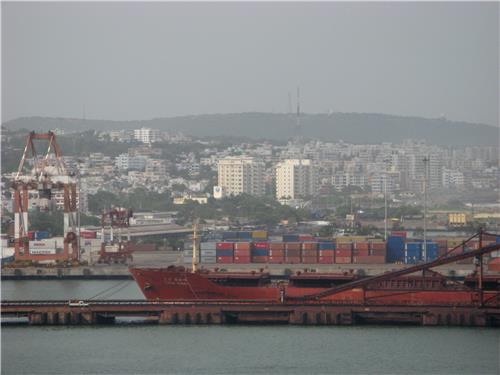 There are four seaports including Visakhapatnam port, Gangavaram port, Bheemunipatnam port and Mutyalammapalem port located in Visakhapatnam district. First one of these is one of the biggest seaports of India while the last two are still in development phase. Passenger service of cruise from Visakhapatnam to Port Blair is available for everyone.

Krishnapatnam Port is the only seaport located in Nellore district. It is a deep water port and is operational fully.

Kakinad port and Rawa (Surasenayanam) port are located in East Godavari district of the state. Kakinada port is one of the major ports of Andhra Pradesh, while the second one is a minor port.

Bhavanapadu port and Calingapatnam port are both located in Srikakulam district. Both of these ports are green field port and are mainly used as fishing harbor only.

Narsapur port is the only port from West Godavari district. This port is a green field port and is still in proposed form.

Nizampatnam port is the only port of Guntur district. It is a green field port and is still in proposed form.

Vodarevu port is the only port of Prakasam district. It is a green field port and is still in proposed form.

Visakhapatnam airport is located at a distance of about 12 m from the city and is an international airport. The airport used to carry passengers via one flight in entire day till 1999, but after the year of 2007, it became popular and finally turned into an international airport in the year of 2012. International destinations of Visakhapatnam airport include Dubai and Singapore currently. Kuala Lumpur is the next proposed destination, which will come into effect from February 2015. Domestic flights fly to and from Bangalore, Chennai, Hyderabad, Vijaywada, Tirupati, Delhi, Mumbai, Raipur, Bhubaneswar, Kolkata and Jammu. Charter services are also available from Port Blair. Airlines indulging in the operations include Air Asia India, Air Costa, Air India, Air India Regional, Indigo, Malindo Air, Silk Air and Spice Jet.

Vijaywada airport is located at a distance of about 18 Km from the city and is a midsized airport. Air Costa, Air India and Spice Jet are the only airlines to operate from this airport and they fly to and from Bangalore, Coimbatore, Hyderabad, Visakhapatnam, Tirupati and Delhi.

Tirupati airport is located at a distance of about 14 Km from the city of Tirupati at Renigunta in Chittoor district of Andhra Pradesh. This airport is meant for the devotees of Tirupati Balaji temple located here. Main airlines operating from this airport include Air Costa, Air India and Spice Jet. They fly to and from Hyderabad, Vijaywada, Visakhapatnam and Delhi.

Puttaparthi airport is located at a mere distance of about 6 Km from the Ashram and is spread over an area of 450 acres. It used to be served by the Indian airlines till 2005, but now the same is closed for domestic flights. It is owned by the Sri Sathya Sai Central Trust and used to carry passengers from Mumbai and Chennai earlier.

Rajahmundry airport is located at a mere distance of about 18 Km from the city of Rajahmundry. There is only one destination (Hyderabad) connected to this airport as of yet and JetKonnect and Spice Jet both operate a flight to the same destination. The airport is also used by helicopters of government agencies and ONGC for their offshore oil exploration activities.

Railway plays the most important role when it comes to distant travel as all of the people can’t afford flights for their journey. It offers a comfortable, fast and affordable medium to everyone and enhances economic development. Industrial and tourism sectors are highly impacted by the railways. Andhra Pradesh has a long network of 4,403 km with different kinds of trains including express and passenger trains. Andhra Pradesh railway falls under South Central Railway zone and East Coast Railway zone. Northern coastal districts (Srikakulam, Vizianagram and Visakhapatnam) of the state come directly under Walter Railway division, which is a part of East Coast Railway zone and is the fourth largest revenue earning division of India. While on the other hand, South Central Railway zone has three divisions including Vijayawada, Guntur and Guntakal. 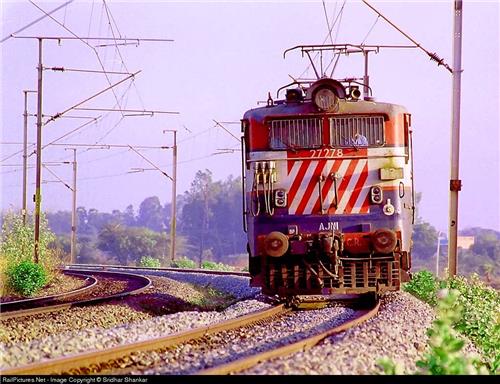 South Central Railway not only covers Andhra Pradesh, but it also covers parts of Tamil Nadu and Karnataka. Vijaywada railway station is one of the busiest railway stations in not only Andhra Pradesh but entire India. Guntakal division of the same is first in terms of route (1,307.07 kilometres) and second highest in terms of tracks (1,872.47 kilometres) in entire South Central Railway zone. Andhra Pradesh is also the pride owner of Eastern Ghats route that runs from Visakhapatnam to Anantagiri and is one of the highest gauge tracks in the world. One of the most important lines of the state is The Howrah-Chennai main line, which connects eastern and southern cities of India together and passes through Rajahmundry, Ongole, Vijaywada, Nellore and Visakhapatnam.