The customs in Andhra Pradesh are as varied as they are interesting! Different tribes have their own traditions and those living in cities follow some other customs. Wedding in Andhra Pradesh is considered as a spiritual bond between two souls and their families. It is not a union of just two individuals but a union of two families.

Most of the marriages are organized in temples while some are conducted outside. However, each ceremony holds a special significance. Preparation for marriage function begin with decoration using flowers and mango leaves and renovation of house. Serving ice cream or sweets before dinner is an auspicious tradition in Andhra. 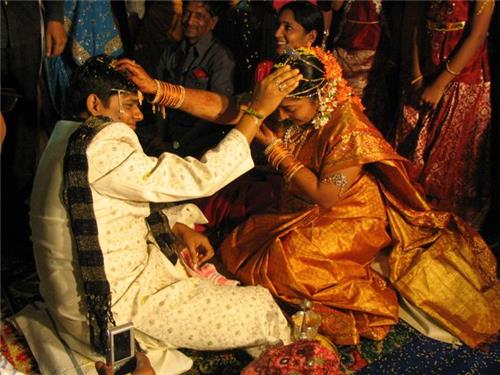 Some special features of an Andhra wedding are -


Important Ceremonies in an Andhra Wedding

Nischitartham or engagement is a ceremony when both families meet and make the engagement official. Muhurtam or auspicious date and time for the marriage is finalized as per horoscopes of the bride and groom. Months of Aashaadham, Bhadrapadam and Shunya masam are not auspicious for marriage ceremony. Exchange of gifts takes place between the two families.

The snatakam or bath graduation is performed at the house of the bridegroom before the muhurtam. The groom wears a silver thread on his body after which he takes over the responsibility as a house-holder.

This is a pre-wedding ceremony in which the bridegroom just pretends to go to Kashi after discarding all worldly pleasures. However, he is cajoled by the cousins and brother of the bride not to do so and within no time the groom relents to their demand!

Both the bride and groom take auspicious bath on the day of their marriage. This custom aims at purifying them for performing various sacred rites.

The bride and groom (in their respective houses) are smeared with turmeric paste or Nalugu (paste made from different types of flours, oil and turmeric) for cleansing the skin and making them radiant. They wear new clothes after this ceremony.

Harati is performed by family members where their family prays for the bride and groom and a happy married life ahead for them.

This prayer session is conducted in the mandapam. This is also the time for 'Pravara' which is a ritual in which the bride's gotram is changed from her parent's gotram to the groom's gotram. The bride performs the Gauri pooja. 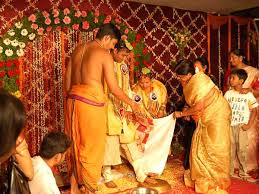 This is a ritual wherein the bride's responsibility is handed over to the groom. The bride sits in a bamboo basket and then brought to the mandapam by her maternal uncle. The bride and groom cannot see each other until kanyadaan is completed and are separated by a curtain as partition.

Since the groom is taken as 'Lord Vishnu Svarupam' (incarnation of Lord Vishnu), the bride's parents wash his feet with reverence. The bride is considered as 'devi Lakshmi' and assures her parents that he will always stay with his bride - in joy and in sorrow.

The groom holds the hands of his bride and both promise never to part from each other.

Amidst recital of slokas by the priest, the bride and the groom apply a paste (made from cumin seeds and jaggery) on each  other's head. This is known as Jilakarra Bellamu. It signifies a permanent bond of love between the couple.

The bride's gotra is changed to her husband's gotra once again. For the madhuparkam ritual, the bride wears a white saree with red border while the groom wears white dhoti with red border. White stands for purity while red is suggestive of strength.

Ten married women or sumangali accompany the bride. Six of them hold plates of sacred rice which signifies abundance.

Akshitalu/Talambralu ceremony is the exchange of garlands between the bride and groom. Every one present blesses the couple and sprinkles flowers and turmeric powder coated rice on the couple.

Both the bride and groom have to take seven rounds of the fire and then the bride walks seven steps (Saptapadi) with her pallu tied to one end o the groom's kanduva (scarf). 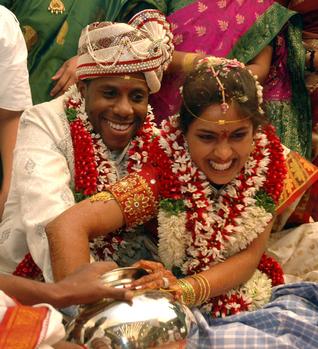 In this ritual, the bridegroom puts toe rings on the feet of his bride. The bride also wears a string of black beads to ward off evil. Thereafter, a vessel filled with water is kept in front of the bride and bridegroom. Both put their hand inside the vessel to fish a ring. This is quite an entertaining ritual as it is believed that whoever gets the ring will be the more dominant member of the family!

The bride is handed over to the groom's family to start a happy life. Post wedding ceremonies include gruhapravesham (when the bride enters the groom's house), Satyanarayana vratam (a prayer session) and uniting of mangalsutram.

Marriage is a sweet beginning when two people share a common space while being together for each other in pleasure and pain. Both the husband a wife lead a happy married life if they are connected together physically, mentally and spiritually with the bond of love amongst themselves.